The Best Motorcycle Road in NJ?
Try Old Mine Road along the Delaware River
....
A Winding Wooded Link
Between Past and Present 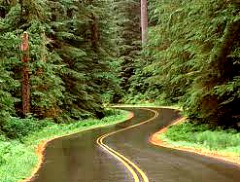 Perhaps the best motorcycle road in New Jersey for me is Old Mine Road as it passes through Delaware Water Gap National Recreation Area.

Whenever I travel through the park near the river, the enjoyment of this winding track, the beauty of the Delaware River valley and the history surrounding this stretch of river combine to create an exceptional ride.

However, the human drama that underlies the origins of this vast park adds a striking dimension to this road and the land it threads together.

It is difficult to comprehend that everything in sight for almost 40 miles was once destined to disappear beneath 160 feet of water.

History points to Dutch settlers as the folks who built Old Mine Road during the early 1600s -- more than 50 years before William Penn set foot on American soil.

That would make it the oldest commercial roadway in the United States -- and probably in North America.

The first residents used the road to haul wagonloads of copper ore from mines near the Delaware Water Gap to Kingston, New York -- about 90 miles north.

Homes and inns along the road protected settlers during the French and Indian War.

George Washington used it to move troops and equipment during the American Revolution.

During the 1800s, sections of Old Mine Road became links in the Underground Railroad.

When the mines closed and times changed, Delaware River valley residents relied more heavily on farming and local railroads, canal companies and other businesses for their livelihood.

Nevertheless, they still depended upon Old Mine Road as a vital means of transportation.

Features that make it the best motorcycle road

Today, within the national recreation area, the road maintains its character as a two-lane country byway that never strays too far from the Delaware River.

It passes historic landmarks, Revolutionary War and Civil War cemeteries and sweeps beneath forested hills that hide the ruins of old copper mines.

Other attractions along the way that make it the best motorcycle road for me include the Isaac Van Campen Inn, built in 1750, Peters Valley Craft Center, and a recreated 19th century rural community at Millbrook Village.

The national area continues for 37 miles from the Delaware Water Gap in the south to near Montague, New Jersey, in the north.

It occupies almost 70,000 acres of mountains and woodlands in New Jersey and Pennsylvania on both sides of the middle Delaware River. This makes it the largest such recreation area in the eastern United States. 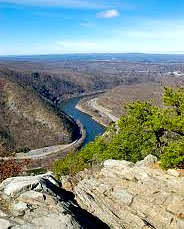 The Delaware Water Gap is actually a mile-long breach in the Appalachians, including a tight “S” where the river flows through Kittatinny Ridge.

The gap’s distinctive feature is the beauty of its rocky cliffs and heavily wooded mountains on both sides of the river where it borders northwestern New Jersey and northern Pennsylvania.

Of course, the major attraction and dominant feature of this entire region is the Delaware River, which is part of the national Wild and Scenic River system.

In addition to its exceptional beauty and clean waters, the Delaware is the only entirely free-flowing, un-dammed river in the eastern United States.

A proposal to dam the river

However, that distinction almost ended in the 1970s.

That’s when a series of controversial and convoluted events resulted in the displacement of thousands of people and the demolition of their homes to construct an ill-conceived dam and reservoir that never happened.

This aborted project led to the creation of this huge recreation area that devoured former residents’ land and property.

The critical link in a long chain of floods and proposed river-control projects over many years dramatically fell in place on August 12, 1955.

That's when Hurricane Connie struck the eastern seaboard and drenched the land with five inches of rain within 24 hours.

Less than a week later, on August 19, Hurricane Diane slammed the region again with rainstorms that flooded the Delaware.

The cumulative impact of both storms produced 12 inches of rain in less than ten days.

The resultant floods and destruction claimed 191 lives across the Northeast, which included many residents and tourists trapped along the banks of the Delaware River.

Soon after this tragedy, the Army Corps of Engineers developed a grand plan to both prevent floods and generate hydroelectric power along the Delaware River.

The engineers wanted to dam the Delaware River five miles above the water gap near Tocks Island -- a featureless strip of land in the middle of the Delaware.

If built, the Tocks Island Dam would flood the river valley and create a reservoir the size of Lake Michigan extending 37 miles north from the island to Port Jervis. 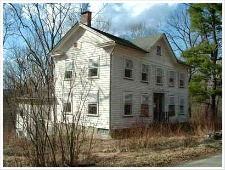 Thousands of people forced from their homes

During the ensuing years, after this plan went into motion, the Corp. of Engineers forced some 15,000 homeowners from land intended for the project.

Many of these residents represented 300 years and 13 generations of history and culture in the Delaware valley.

Farms, homes and villages along the river were left abandoned.

While this land acquisition process was tragic and disruptive, the Corp. of Engineers fanned the controversy by attempting to rent the former residents’ empty homes.

After running a “houses for rent” ad in the Village Voice, waves of hippies and street people surged into the area.

They freely occupied all vacant buildings on the  New Jersey side, then crossed the Delaware into Pennsylvania to take over empty structures there.

Remaining local residents and their displaced neighbors were outraged, which caused plenty of bad blood on both sides of the issue.

This situation came to a head in 1974 when armed federal marshals and state troopers swept through the area and forced the recent, unlawful residents from the land.

Bulldozers followed the raid and demolished most of the empty buildings, including those with historic roots.

But rather then return or sell parcels of land back to displaced residents, the government transferred the entire 70,000 acres of confiscated land to the National Park Service, which turned it into today’s recreation area.

Take a ride along Old Mine Road through the park and you will see vestiges of the controversy.

Mailboxes with no homes behind them dot the roadside.

Rusting chains block the barely discernable remnants of driveways overrun with weeds and debris. Unidentified side roads go in circles or otherwise lead to nothing. “No Trespassing -- Government Property” signs abound.

A striking symbol of the areas abandonment is the small, pastoral village of Wallpack Center, N.J., now used primarily for park storage.

It presents an authentic and reasonably well preserved example of a local Delaware River valley settlement.

While its commercial and social life is essentially non-existent, it retains many original structures -- including a few homes, a church and post office -- in a virtually unaltered 19th century landscape.

However, during all of my travels up, down and around Old Mine Road and alongside the Delaware River, there's one thing I consider particularly surprising.

And that is…as much as I've searched, I have never seen any signs that identify or point to the infamous Tocks Island.

How you can find Old Mine Road

You can find Old Mine Road and Delaware Water Gap National Recreation Area when traveling east along Interstate Route 80. Take the last exit in New Jersey before crossing the river.

If you are coming from Port Jervis in the north, take County Road 521 south to the intersection of Route 206.

The right turn after the stop sign puts you in the park and on Old Mine Road.

Perhaps it will become one of the best motorcycle roads in New Jersey for you also.

And remember, if history had turned out differently, everything around you would be lost beneath 160 feet of water at the bottom of a colossal reservoir. 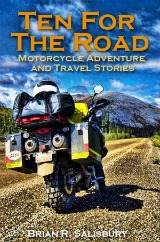 Return from this story about Old Mine Road